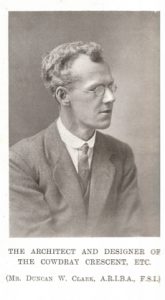 The practice was established in 1908 by Duncan Clark, and he was joind after WWI by Herbert Beckett. Their oldest recorded project, dating from 1923, is the War Memorial in Cowdray Crescent. Buildings from the early years of the practice that may be familiar to Colchester residents are Barclays and the Cooperative Bank, on the High Street.

Through the post-war years, DC&B continued to work throughout Essex, notably designing Kent Blaxill’s building at Layer Road and Colchester Crematorium. Through the 1980’s, DC&B were involved with large extensions to Colchester Institute and the competition-winning scheme for the Culver Street redevelopment, and more recently on a series of new and remodelled lifeboat stations for the RNLI on the east and south coasts of England, and the south of Ireland.

Duncan Clark and Beckett are Chartered Architects in Colchester, Essex. Established in 1908 and practicing for over 100 years, we strive to provide our clients with quality design service based on years of professional experience and an openness to innovation and the use of new techniques.